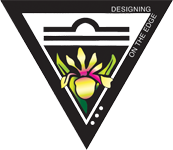 Floral artist and designer, Lea Romanowski, has always been a creative force continuously transforming ordinary things into striking design.   During her 30+ year career in the floral industry, Lea has made an art out of pushing the boundaries of design. In 2000, she founded Designing on the Edge and began her full range of services including structural floral art and small to large scale event design and decor.

Thinking out of the box is too limiting for Lea, so she prefers to build the box. Her extensive skill set of carpentry, painting, metal work, electrical, and sharp design sense inspired Lea's nickname of MacGyver. Lea is the "fixer" of all things visual and is guided by the principle that no task is impossible, you just might need to build the solution...literally!

Believing in education Lea became involved with Flowers Canada in the late 90’s after receiving her Canadian Accredited Floral Designation. She was then inducted into the American Institute of Floral Design in 2003, the following year into the Canadian Academy of Floral Art. Her work has been featured in Canadian Florist, Floriology and Canadian Special Event Magazines.

For the past twelve years Lea has been an instructor for the Floral Design Program at The Mount Royal University. As a pioneer of floral design, Lea offers her students knowledge and guidance on the importance of executing an idea flawlessly.